“Now I know I’ve got a heart because it is breaking.”

“Never trust anyone who has not brought a book with them.”

“Ideas are more difficult to kill than people, but they can be killed, in the end.”

“There is no exquisite beauty… without some strangeness in the proportion.”

Siege and Storm by Leigh Bardugo

A Court of Thorns and Roses by Sarah J. Maas

– Markus Zusak, I Am the Messenger

“Beauty lay not in the thing, but in what the thing symbolised.”

– Thomas Hardy, Tess of the D’Urbervilles 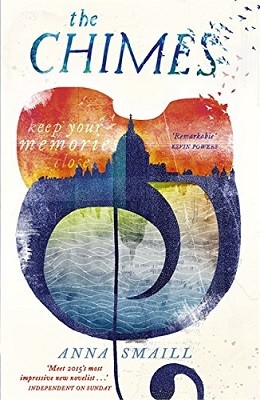 The Chimes is set in an alternate London, where people live with a constant inability to form solid memories. The mysterious Order have imposed this state of enforced amnesia through music, rendering the past lost. The book follows the journey of Simon, who after travelling to London searching for answers about his parents begins to realise he possesses a gift that could help destroy the existence of the memory stealing Chimes.

I really, really liked this book. It was refreshingly original, if a tad confusing at the start. Once you begin to puzzle out how things work in Simon’s London, and indeed the strange, musical language Smaill has cleverly woven throughout her poetic prose, this is a highly rewarding read. This does mean that the book takes a little while to gather momentum, but once it does the plot swiftly carries readers toward the novel’s climatic close.

As already mentioned, Smaill has added a range of strange, musical jargon throughout the text, such as “lento” and “subito”; whilst at first this is rather like encountering a random piece of a foreign language in an English sentence, it slowly becomes more familiar and adds a distinctive sense of unique language that further establishes the strong sense of setting.

Whilst I liked the two main characters, Simon and Lucien, and the secondary character Clare, I felt that I never got to understand many of the other characters well enough to really develop a connection to them. However, this issue is intrinsically linked to the overall concept of the book – how is our narrator, Simon, meant to provide us with insightful details of characterisation for all the people he encounters, if he struggles to remember anything? In order for Smaill’s intriguing concept to work, I feel that strong characterisation, mainly for secondary characters, had to be somewhat sacrificed. Once I realised this, I also came to understand that I would not have engaged so well with the book if it had created this wealth of added characterisation I normally love in books. The pain of not remembering, of being incapable to hold important details about people you care about in your mind, would not have resonated at all unless it directly inhibited Simon himself. Overall, this was a wonderful book and I highly recommend it.

“If someone knows all there is to know about you, isn’t that a kind of forgiveness?”

This bit is tricky. The Chimes’ quirkiness means that I’m struggling to think of anything else I’ve read that was similar. It did give me a sort-of-but-not-really-the-same feeling as when I read Heaven by Christoph Marzi and The Book of Dead Days by Marcus Sedgewick. I think because both books also have an element of forgotten memories and both are unsettlingly mysterious.

This month, I’m aiming to rea

I’ve nearly finished The Chimes, and I’m really enjoying it so far.

Marchetta builds on the world she crafted in this book’s predecessor Finnikin of the Rock,  creating an exciting adventure centring on the character of Froi as he undertakes a mission into an enemy kingdom, Charyn. However, I felt that this instalment lacked the same focus that drove Finnikin of the Rock  – at times, it felt like we were meandering before continuing on with the actual plot.

I was surprised by Froi’s character in this book as well. After the events of the first novel his character had left a bitter taste in my mouth. I understood that he’d had a difficult childhood living on the streets of another Kingdom and that this has irrevocably impacted his behaviour, but the manner in which Marchetta used his character’s attempted rape of another character as a mere plot device in the first book left me feeling distinctly uncomfortable. Part of the reason why is that it felt, even more so now after reading Froi of the Exiles, out of character – yes Froi is harsh and violent, but he does seem to have some form of moral compass. Which is why the attempted rape in Finnikin of the Rock bothered me so much; if Marchetta had been consistent with his character’s actions, whilst I would have still found them unpalatable, they would have at least seemed less like a gaping plot device. Furthermore, how she depicted the other characters’ reactions to rape was also lacking in depth and emotional consequence.

To be honest, Marchetta’s handling of such a sensitive subject as rape remained problematic for me in Froi of the Exiles. I do believe that the issue of rape/consent deserves to written about and discussed, but in a sensitive, well thought out and accurate manner. At times, you see glimmers of emotional insight, but there remains instances when the whole thing feels contrived and solely there to add shock/disgust. Unless you’re trying to express something significant about the issue of rape, please don’t use it, repeatedly, to elicit some kind of response from a reader and/or move the plot along.

On the other hand,  I did enjoy the way Marchetta continues to portray the ideas of identity and belonging through analysing the importance of family and blood, as well nationality. It’s probably what bothers me even more about these books – there are parts of them I greatly admire, and Marchetta’s writing style itself is very readable and engaging, but how she portrays other issues with such a lack of depth leaves me feeling really conflicted.

“…the greatest weapon against big stupid men was a sharp mind.”

“‘Are you an idiot, or an idiot?’ Gargarin hissed.
‘The first one. I really resent being called the second.’”

The Throne of Glass series by Sarah J. Maas